The Bison is the new national mammal! 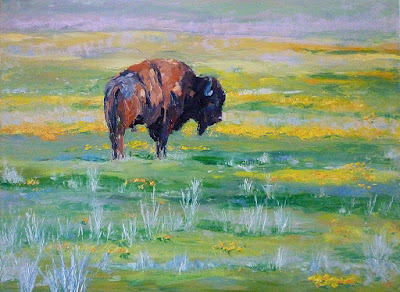 Bison in the Grand Tetons
18" x 24" x 1.5"
Oil with a palette knife on Blick Studio Artist Board
Commission

I finished this commission up this past weekend for Will and Sue and I received a wonderful email when I sent them the painting to preview:

"My wife Sue decided to let me commission this painting for my birthday and it is nothing short of fabulous! I have been looking for an original bison painting on and off over the years as it is an icon of the American West and Native American culture. Last summer we were lucky enough to take our two children out to Jackson Hole Wyoming and hike in the Grand Tetons as well as Yellowstone, the Big Horn Mountains, and the Black Hills where we saw Mount Rushmore and, our favorite, the Crazy Horse monument.
At some point during the trip, my son Wyatt also became enamored with the bison we saw and decided it is his favorite animal. He is going to insist that the painting go in his room, I will have to convince him that we need it out were all our visitors can see it! (Did I mention that it is extraordinary?) We looked hard for wildlife on the trip and were lucky enough to get a few good pictures. My daughter decided she liked a picture we took of a bear cub in the Tetons the best. Maybe some day... 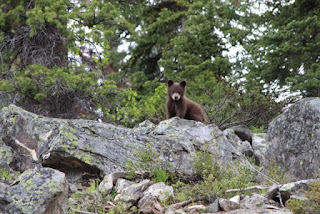 Yes, the painting of the Bison is better than the picture and I am glad I waited and was able to get you to paint an original from one of my own pictures."

Isn't it fun to get a the story and personal meaning behind a painting? I think that bear cub photo is just the cutest thing and would make a great painting as well. But I hope that there isn't a protective mama bear right behind him!

Did you know that the Bison is now the new national mammal? Yes, that's right...Congress just came to a rare consensus and passed the National Bison Legacy Act which makes the bison the first national mammal of the United States. He will co-serve with the Bald Eagle as a national emblem. Here is the seal: 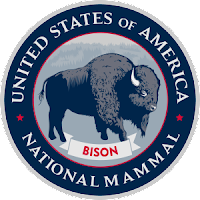 This Bison is wonderful, Ann. I can see why they would be thrilled. I was enamoured with the bison on a trip to Yellowstone. HUGE - I couldn't get over their size.
Love the strong shape of the head - you did it so well. Having it is the shadow like that made it even more dramatic. great knife work!