Rembrandt, master of light and dark 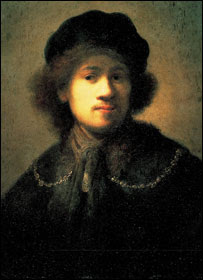 This past Sunday was the second session of the artist lecture series at RISD. The focus was Rembrandt van Rijn. There is so much to learn about the artist, the two hour lecture can only touch the surface.

He came from a lower middle class family, in Leiden, Holland (near the Rhine-thus the van Rijn of his name). Most of his life as a working artist was spent in Amsterdam. Franz Hals lived 12 miles away, but they never met. Unlike other painters of the time that mostly did commissions of biblical or idealized subject matter, Rembrandt painted what he wanted. He did not set out to make the perfect female form, nor paint men like nobility. Like Caravaggio, he painted in the moment, acknowledging the ordinary. He also had a sense of humor and satire often seen in his work as well. He decided when his artwork was "done" and often his commissions were rejected for being "unfinished."

He was especially know for his etching techniques, which I enjoy. Look at the wonderful light he created in this self portrait. I found it interesting to know that he used to bid on and buy his own artwork and prints in order to drive up the prices. Even so, at the age of 63, he died penniless. His artwork considered "out of style" by then. 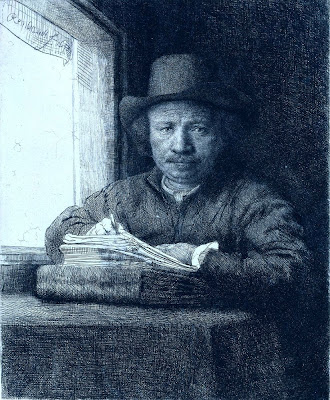 It is always insightful to see artists sketches and this one is no exception. You can already see where he plans to paint the deep darks. 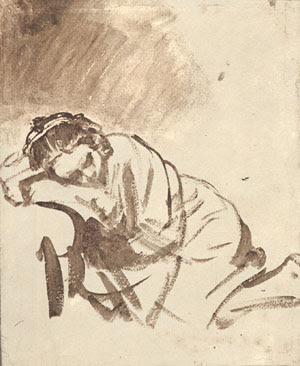 Below is portrait of his son, Titus, the only one of his 4 children to survive into adulthood. Look at that golden light. It's inspiring to see what he could achieve with his limited palette. 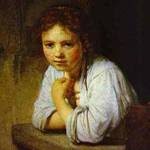 Next up, Vermeer!
Posted by Ann Gorbett at 2:43 PM

Lovely to learn a thing or two about Rembrandt, thank you. Looking forward to your synopsis of Vermeer. How exciting!

What about a post about your botanical illustration class, too?