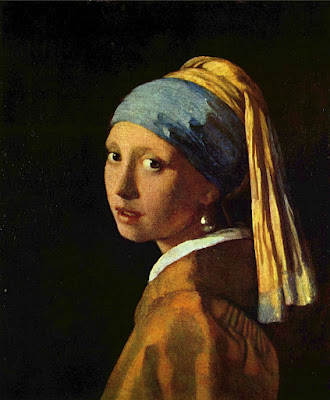 Sunday was the third and final part of our RISD art history lecture series. The subject, Vermeer!

There is very little record of Johannes (Jan) Vermeer's life, but here is what we do know. He lived in Delft, in The Netherlands (1632-1675) and had 11 children, 8 survived. He only produced about 30 paintings in his short lifetime, about 2-3 a year, which was significantly less than most artists of that time. He married into wealth and even though he was an art dealer by trade, he seemed uninterested in selling his own work. The book and movie The Girl With The Pearl Earring obviously raised recent interest in his life and work, but his paintings of everyday life have made him a popular artist for many years.
Like other artists of the time, he started with religious subject matter. Here is one of his early paintings. 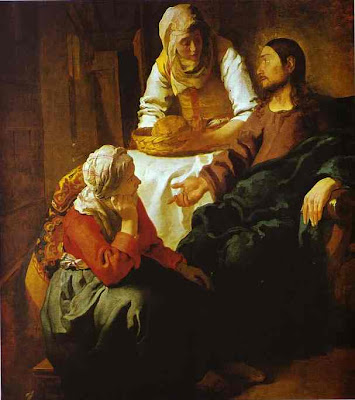 Then he started painting images from his everyday life. Below is a view of Delft and was the only panoramic scene he painted. Apparently, if you went to Delft today, this scene would still look very similar. I find this painting mesmorizing and would love to see it in person some day. 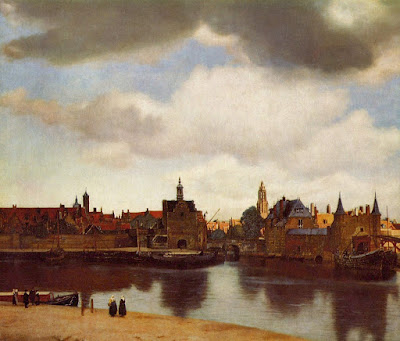 This next painting is called The Little Street and it shows Vermeer's house. Isn't there something kind of Norman Rockwell about this? 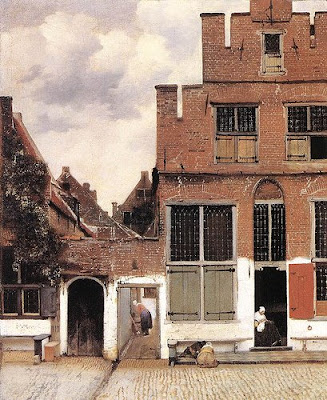 Then he moved inside for his subject matter and stayed there. The painting below is called the The Concert and was the one of the paintings that was stolen from the Isabella Stewart Gardner museum here in Boston in 1990. What is so appalling is that the thieves actually sliced the painting right out of it's frame. Ahhhh-so tragic! Hopefully some day it will be recovered so we can all admire it again. 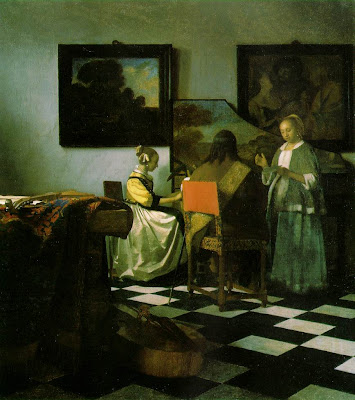 Vermeer was quite the set decorator. Everything was positioned to create the most dynamic composition with the light source almost always coming from that same window at the left. I particularly appreciate the intricate floor patterns he creates and his use of negative spaces to aid in his composition. It is believed that he also used the camera obscura to help him with his compositions and to maintain consistency with repeated sittings of the models. His use of highlight (such as on that famous pearl earring) is also an indication of some kind of camera-like effect. In addition, he used the scenery to give hints about what was going. For instance, when you look at his work, take notice of the paintings hanging on the wall. He was known to have quite a sense of humor.

I noticed, even though the lecturer didn't mention it, that in his later paintings, he focused in more on the people instead of the entire scene. This was one of my favorites. Check out that red feather hat. Amazing! The book, Vermeer by Lawrence Gowing was recommended for those wanting a good read about his life. And if you've never read Tracy Chevalier's book , it is one of my favorites.
Posted by Ann Gorbett at 9:00 AM

YAY! I loved this post, Ann. Thanks for the lesson. :)