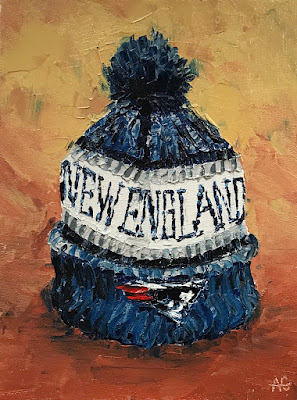 It seems a little early to start thinking about football season. I mean summer just started, right? Well I am so excited because we just purchased tickets to see the Cleveland Browns play the New England Patriots at Gillette Stadium in October. This will be our first game at Gillette Stadium even though we have been part of the Artists Studio and Gallery at Patriot Place for 8 years now which is located right in the shadow of the stadium. We've worked during games before and it is crazzzee.

My dad was a loyal Browns fan until the day he died so I will be secretly wanting a win for him and a good season for the Browns as well. Plus the two teams are featured in my painting of the stadium I posted a few months ago. Our seats will be in the upper left section of this painting. As they say, "the nosebleed section."

Polo bought me this Pat Hat last year and I love it. It is so warm I wear it all winter long. I'm sure I will be wearing it at the game along with something Browns related as well. It will be a win win game for me.
Posted by Ann Gorbett at 10:11 AM