In the moment with Caravaggio 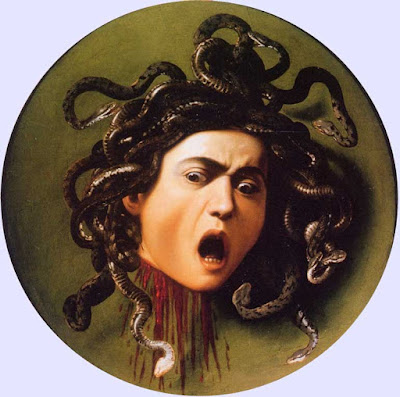 Yesterday we attended a lecture at RISD (Rhone Island School of Design) about the artist Caravaggio. I knew very little about the artist before yesterday, but what a troubled and violent life he led. His mother died when he was a young boy and shortly after, his father, grandfather, and uncle all died of the plague leaving him an orphan. He painted during most of his turmultuous life with mixed reactions. About half of his commissions for the church were rejected. He continually ridiculed other artists of the time, was constantly getting into fights, and was on the run for murdering a man. But even on the run, he continued to paint.

He sent this painting to the Knights of Malta who were hunting him down for the murder. The head of Goliath is is a self portrait and was sent to taunt them. 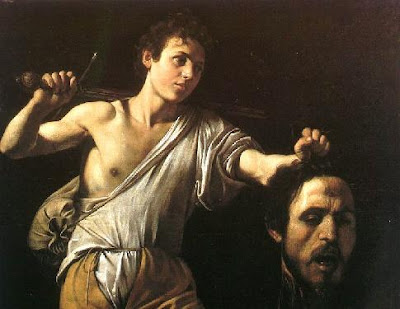 No matter the violence, his mastery of the craft and the dramatic effects he used are admirable. Some people at the lecture (many non artists) were bothered by some of his anatomy renderings-"it doesn't look right" and by the fact that some of the male figures look very feminine "why does he have a ribbon in his hair?" 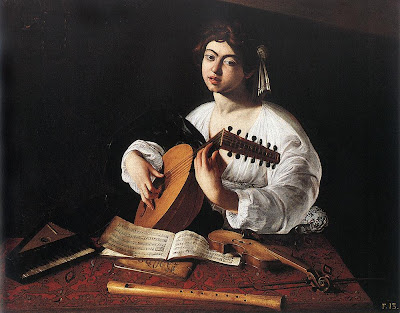 But it is undeniable that his style of "in the moment" was striking, upfront, and immediate. You have to take note. He makes you feel like you are right there watching. It's also interesting that the music in this painting is real and the notes could actually be played if you had a really good hi res image.

We were discussing afterwards that we thought his life would make a great movie. Then today I discovered that there is a movie that was made in 1986. We going to try to find it somewhere and watch it. But perhaps it's time for a remake-could be a Joaquin Phoenix comback!

There are two more classes in this series. Rembrandt and Vermeer. I can't wait!
Posted by Ann Gorbett at 9:01 AM

Ann, I feel like the medusa head this morning! We were going to have our ultrasound to know if we're having a boy or girl and we canceled. Drat!

Excellent artist that Caravaggio. Tony had lent me a book about him you may want to check out: The Lost Painting. It was a fun, quick read.

Hope you are well. :)
Get some sleep this week so you don't miss class!

I was going to mention the book when I saw Kim's comment. Remind me when I get back. It's about the research of finding/identifing one of his paintings but has stuff about his life interspersed. Interesting reading.
Classes like that are great. Judy attends a lot of them at the MFA and when I tag along, I really enjoy them. We'll have to check out RISD.
Who was the speaker? We used to have a guy from RISD come to the FAA to give a lecture on an artist or compare artists at the last meeting in June.